Jadwiga’s brother about the artist and her graphics

Jadwiga was and still is not only a person very close to me, but at the same time somebody extremely interesting and therefore worthy to get acquainted with. She, an artist through and through, convinced of her own views, which are often based on emotions, moods, intuitions. I am, on the other hand, a consistent rationalist: we often had different opinions, also in terms of art. But now it’s all only about her and her personal relationship to her own graphics. Her way of thinking and approach to art was very familiar to me. And finding that again in her graphics has become something like my own research.

Jadwiga was reluctant to comment on the meaning of her individual graphics. She felt that the viewers should see for themselves what the artist wanted to tell. Although the titles of her work, as well as the rich symbolism helped with the interpretations, her later art works became increasingly illegible, at least for me. One of the causes was certainly the approximately 1000 kilometers that separated us and made more frequent contacts difficult. However, what I have learned from her and her husband Stanislas allowed me to explore her works more diversified, more deeply than anyone else would have been able to. And I would like to discuss these insights in more detail below.

In 1969 Jadwiga interrupted her studies because she had to undergo intensive therapy. Understandably, she then created her diploma woodcut and the graphics of the next two years under the influence of the formative experiences that she and her fellow sufferers had to live through. The themes of these works were suffering, the cooing of doves that could be heard through the open window, when you are tied to the bed yourself, or the thoughts about life and death. Increasingly, social issues, the pollution of the air, the poisoning of the North Sea, the dehumanization of sport, the suffering of women or the blind fascination of technology that destroyed nature (“Apocalypse of the 20th century”) were added.

From the year 1977 onwards she created all the graphics as wood engravings, except for a few linocuts for the opera in Adelaide. She handled this exceptionally difficult and laborious technique from the beginning masterly, and often made astonishingly large formats. Several times I heard praise from other graphic designers who allegedly gave up this technique quickly after their first attempts at much smaller formats. At that time she also introduced a new theme into her works, a kind of psychologized character study of certain personalities, of course from her own point of view. The themes elaborated by Jadwiga are in themselves interesting. In addition her way of dealing with them is very personal, since the emotional life of the artist is also reflected in the creation of the works. So it is, in my view, worthwhile to deal with them in detail, to understand them, perhaps even to experience them.

I start by comparing two wood engravings, which give a happy impression, a rather rare emotion among Jadwiga’s graphics.

For this work she was inspired by an old photo showing a nice old woman looking forward to a roast goose. As Jadwiga told me, she neither liked this weirdly dressed lady, nor the ornamental trees in the background. The frightened goose with its bound feet was probably more likable for her. Both characters of this picture, as the title says, expect the same fate, hard as the sharp edges of the wooden box. 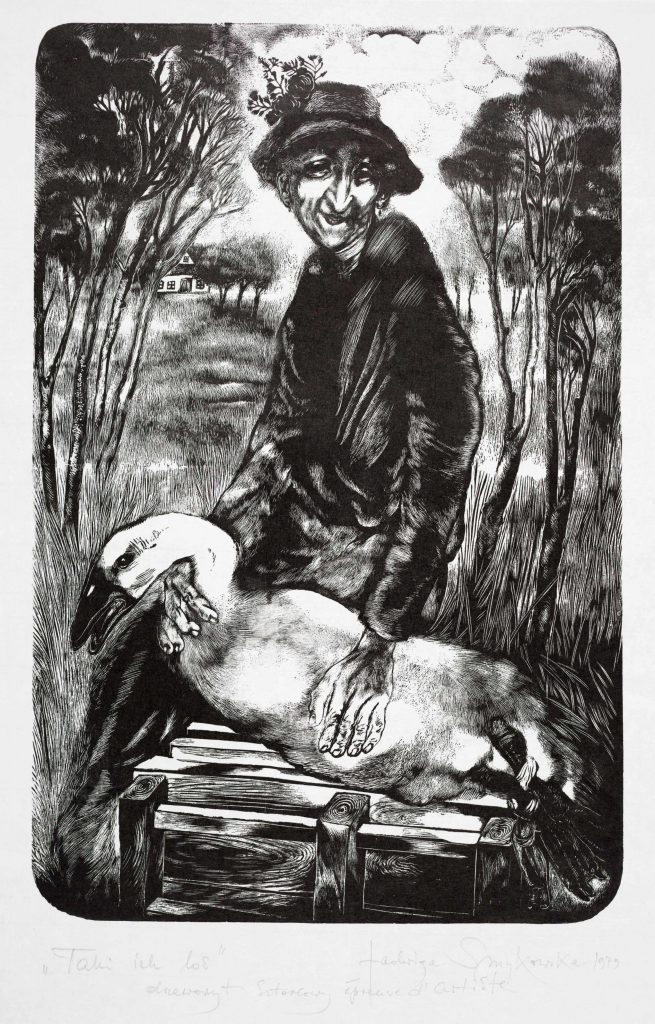 The second work radiates much joy of everyday life. Satisfied are both the farmers, as well as the contentedly drinking or chewing cows. In the background the willow trees grow, which are to see in many graphics, rustic, beautiful and versatile useful. “Enjoy the day, every moment!” That is what the artist wants to suggest with this title. 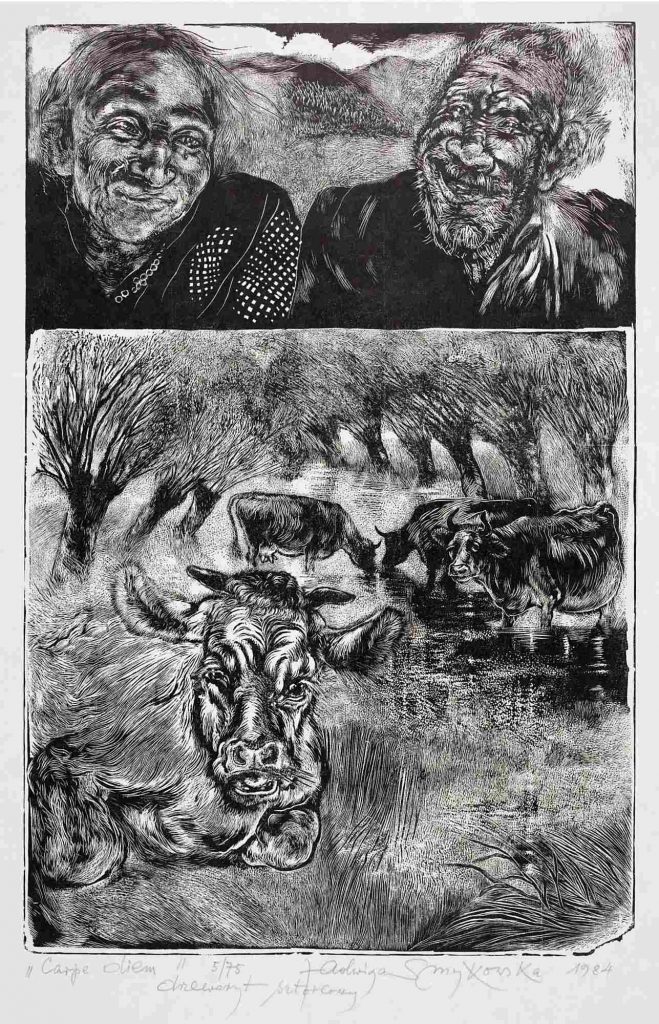 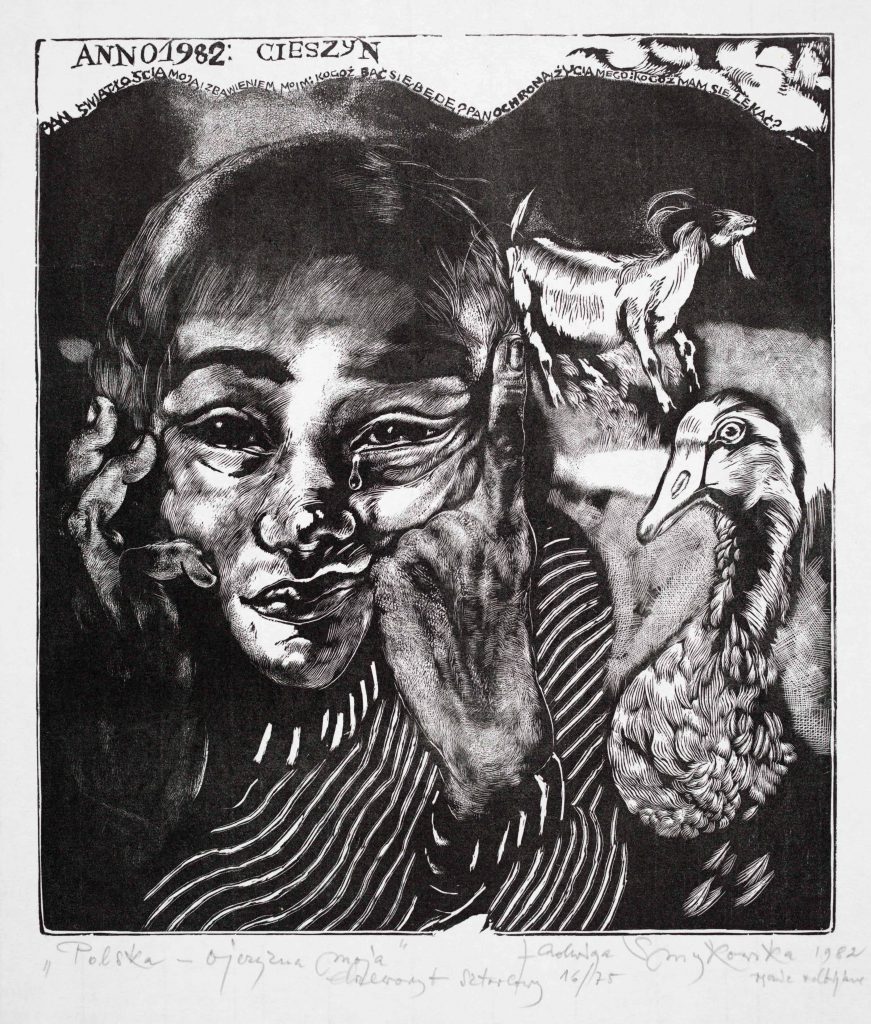 This wood engraving was made at the beginning of the martial law in Poland. However, Jadwiga had long been trying to work out the right expression of concern, as some surviving sketches show. She also told me that when I found her studying her face leaning on one hand in front of the mirror. This indicates that she not only put a lot of manpower into the production of her wood engravings, but also in their preparation. Her concern for Poland was particularly justified in 1982, but this issue remains current. Furthermore, one can see here how strongly Jadwiga combined her place of residence Cieszyn with the term “fatherland” and how she sought comfort in religion. On the ridge of Czantoria and on the other mountains of Beskid, she engraved Psalm 27 instead of trees. And for anyone who doubts that she was an expert of the wood engraving technique, have a closer look at the letters through a magnifying glass. Jadwiga did not allow herself any mistakes, because this technique didn’t allow corrections without using any glue.

These are seven wood engravings that were created in 1980-84 and 1990. For these she referred to numerous sketches and drawings, which she made during her nine-month journey across Australia in 1978. Some of these drawings can be viewed on this website. Jadwiga said that she found nature very interesting, but many residents did not make a good impression on her. You can feel that in these wood engravings. Affection is mainly found in the portraits of the three people who were considered to be the scum of society: an orthodox rabbi, a tramp, and an Aborigine child. Other works show people to whom only money is important. She had met a lot of them at horse races and in pubs, but also at private parties. 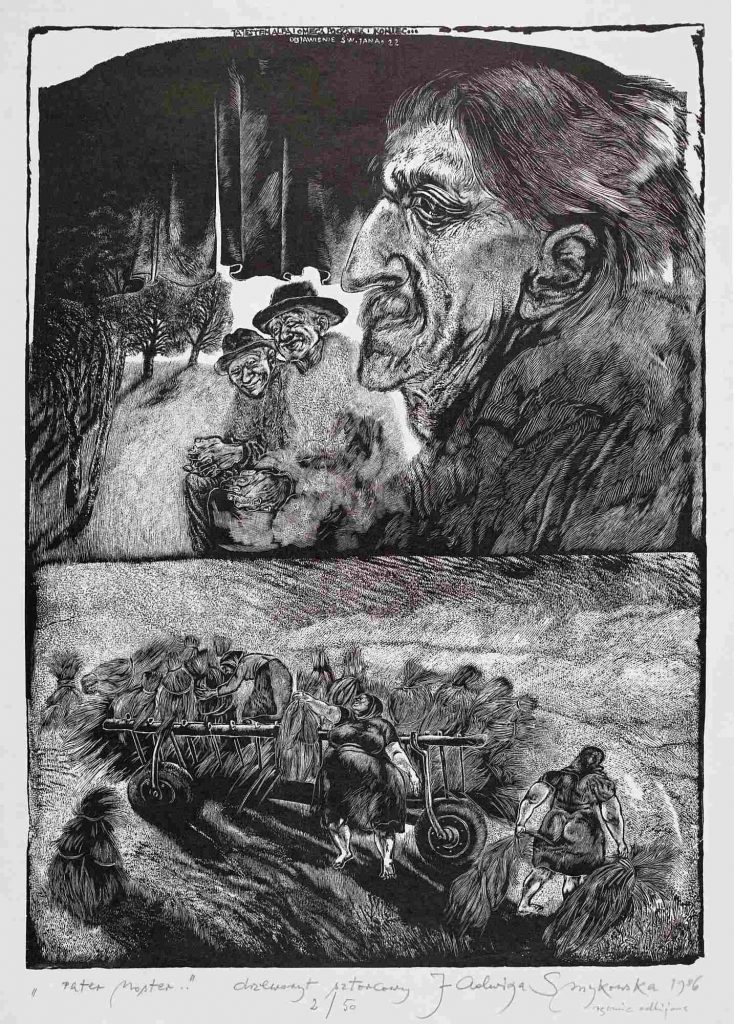 This wood engraving consists of two pictures. The upper one shows the much older, thoughtful painter Alfred Biedrawa, with whom she discussed a great deal in Cracow and at the Cieszyn alma mater. The peasants sitting in the background watch him with a mocking smile. The sky is obscured by an opaque curtain (which can also be seen on some other wood engravings), symbolizing the “great mystery”. Over there she mentions the Revelation of John 22:13. Did Alfred share Jadwiga’s views and beliefs or did he disagree, shown in the peasants’ smiles?

In the picture below, you can see hard-working harvest workers. Jadwiga valued the physical work very much and she sometimes depicted worn-out hands in an exaggerated way. Why did she associate the bottom picture with Alfred? Did she want to oppose the burly peasant women to the young, nude town women often drawn by Alfred? Each work of art is addressed to art recipients, this one likely to Alfred. Too bad that one can no longer ask him how he understood Jadwiga’s message.

This picture shows several “heroes” on various levels of the work. On the left side is a brightly lit, clichéd hero proudly presenting his medal-decorated chest. Jadwiga saw him in Australia, not in Poland or in the Soviet Union. For her, the true heroine is the woman with a wrinkled face, mother of some children, always overworked and tired, but proud of what she has accomplished. Tired is also the toilet cleaning woman who does her thankless work well, as she seems to be equally satisfied. Shown even deeper are gray heroes who had to queue up everywhere, which was completely normal in Poland, not just in front of the toilets. After all, the tired heroes are all those who lived in the horribly poisoned regions of Silesia, as can be seen in the background. 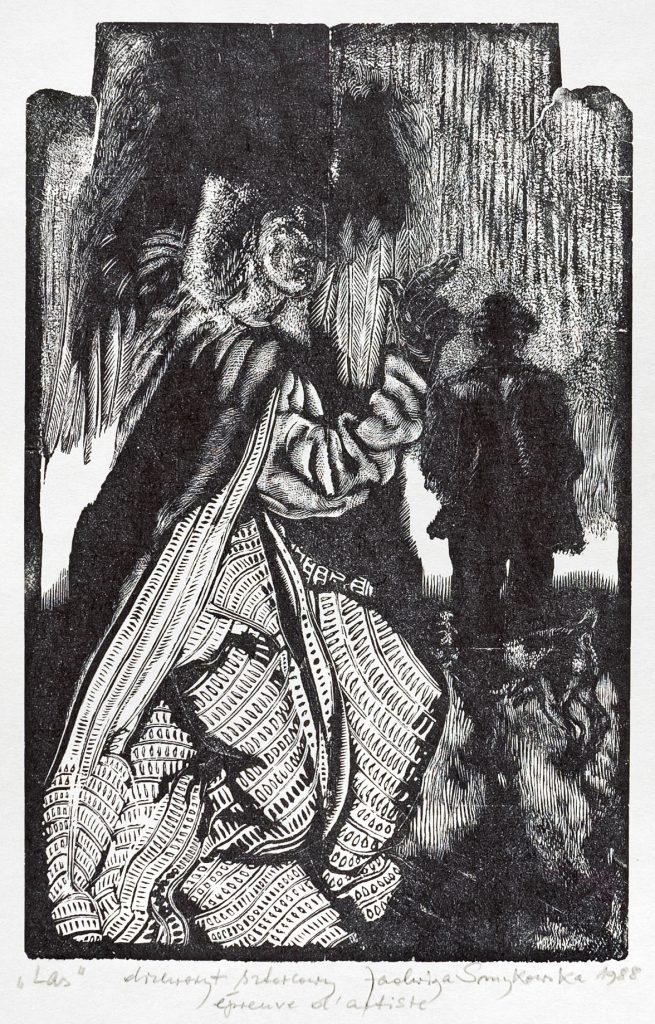 The message of this picture is clear: The guardian angel helps to walk through the forest and through life. Jadwiga merely used the traditional conception of the angel as a representation of the esoteric powers and rays which, as she believed, had a positive effect on us. She was convinced that she herself can recognize which of these effects are beneficial to her and which are harmful and, accordingly, she led her life.

This is a highly emotional image of a person unadapted to the new age. A naked (defenseless) pregnant woman (concern for the next generation) stands on the lifeless earth. Only the small plant at her feet indicates a glimmer of hope. Most of the new world is filled with noisy toys (symbol of technology). The rest is covered by a dense curtain and three figures try to brighten all this up. They personalize (from left): mass media, folk knowledge and science. Religion has nothing to report here. Jadwiga has trusted only the middle figure. As far as I know, she never fully understood science and technology and hardly trusted either one. The beads around the plant are crystal spheres of clairvoyance, for Jadwiga a symbol of credible intuition. My question as to whether she truly takes such a gloomy view of the world already now, she answered “partially yes” and showed me an earlier reprint of this work, titled “Attention, Attention, It Comes”.

Adapting people to new living conditions is a science topic that I have been interested in for years. Maybe that’s why I was fascinated by this wood engraving, but after a few days I took it off the wall again. It is clear to me that Jadwiga showed the negative emotions of people who are not adapted to the new world with an artistic exaggeration, but in such a suggestive manner that I truly felt sorry for them. 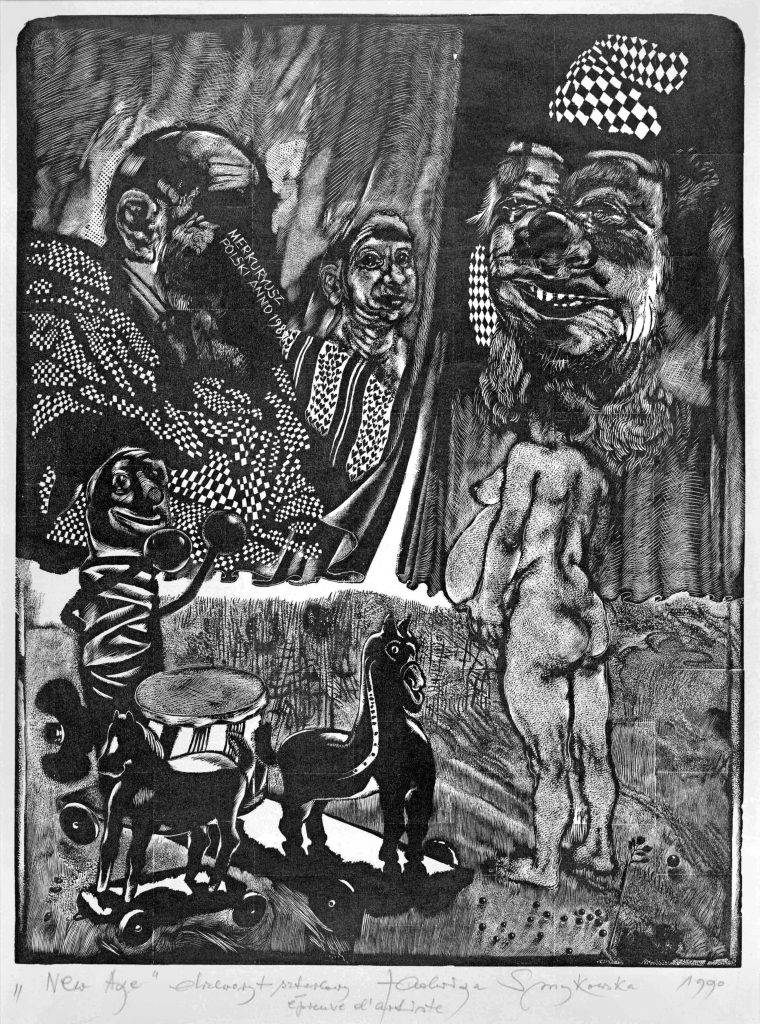